Drugslab is a BNN production investigating the effects of various recreational drugs using yellowcog’s kit to see results in real-time. We’ve always prided ourselves on delivering the unusual – people we know seem to do unusual things – and this is a prime example. 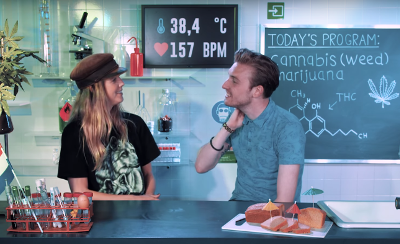 The experiments are simple – each week one of the hosts explains about a drug, talks of the dangers, the dos-and-don’ts, then takes the drug and explains the effects as they happen. We can see an objective view of their physiological reactions in real-time via the yellowcog kit relaying their vital sign data to the TV screen behind them. What we can see is the subject’s heart rate and temperature – vital signs that are good indicators of the metabolic changes caused by the drugs.

The experiment wouldn’t be allowed in many countries but is being recorded in the Netherlands where they have a different approach to drugs. It is hard to argue that young people shouldn’t be made aware of the whole picture surrounding drugs – the more they know, the safer they will be.

I encourage you to watch the shows – the hosts are a delight to watch as they combine lots of fact with just a little mischief. While one is under-the-influence the other takes on the role of a friendly supervisor to question them about the effects, their feelings and changes in perception. The programs are amusing and well produced with a quality feel to every show. There is a new program out every week on Fridays at 17:00 CEST under the Drugslab YouTube channel.